“I do a lot of art. I was discouraged from it as a kid because I was told I wasn’t very successful. So when I first came to college, I tried to be an engineer student and that failed miserably because I am just not that good at math and science. I finally said we were going to do it my way, and now I am in Arts.  I just saw it like, ‘Look. I am not successful at all in this and I am just going to flop. Then people are going to suddenly change their minds and they’ll be like, “Well, you should have done this,” and I’m just thinking let’s do it now.’  My parents are supportive of it, but I think they wish I would have done something different. With this, it’s kind of iffy at what kind of successes I’m going to get. I’m kind of split in between tattoo artistry and comic book design. My dream job is to become a DC comic book editor. I grew up loving Batman. I like Marvel too. I have no idea where I see myself five years from now. I live one day at a time. 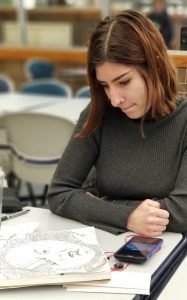 I draw lots of whimsical stuff. Lately I’ve been drawing a lot of Georges Méliès’ stuff. He was responsible for a lot of the first movies like A Trip to the Moon. It’s about two people that get on a rocket and fly it into the moon’s eye and they have to deal with all these goblins and creatures and stuff.” (1/2)

“My childhood was interesting. I moved around a lot. I was not a very good kid because I come from a kind of troubled background and did a lot of stuff that kids aren’t supposed to be doing like riding around hitting people’s mailboxes and stuff. I was still artistic as a kid. I played piano, guitar, and liked to draw. But I wasn’t very productive at that age. Being moved to a totally different environment got me to change my course. I went from the working poor with just my dad to my adoptive mother who was a part of why I started going to better schools and living in better places because we had the money to do it. Things did not work out with her. I’m in a better place now.

I’m the oldest of five kids. I don’t feel pressured to always make the right decision because I’m old enough now to act decent without really having to think about it. I try to watch my mouth around the younger kids because I have a sailor’s mouth. And I try not to be too strict, but at the same time enforce things on the younger kids. I hope they turn out better than I did. They have a better start than what I did, so I expect more from them.” (2/2)